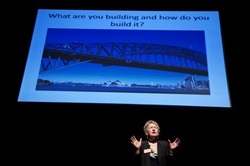 Anyone who has heard Linda Aronson speak about screenwriting knows that the insight that she can offer YOU, about YOUR screenplay, is extraordinary. I have personally heard all of the so called ‘script gurus’ speak, and I can tell you, if you want advanced professional script insight, Linda is the person for you.This is especially true if your story is struggling to fit into the traditional three act structure, or if you have multiple protagonists.'  Chris Jones, Academy-Award Nominated Screenwriter and organizer London Screenwriters' Festival

‘Linda Aronson is one of my heroes.  My inspiration.  Screenwriting Updated blew me away … Linda Aronson was the first person, maybe still the only person to really talk about the fact that structure doesn’t always have to be about one form.’ Pilar Alessandra, Leading Hollywood Scriptwriting Teacher

'Dear Linda,  I want you to know how much I appreciate your work.  If you ever doubt that your writing has made a difference in a writer's life - toss that thought out.  You have made a huge difference in my life and my writing.  Mark Shostrom Writer, Los Angeles

When Linda Aronson first introduced UK writers to her theories on how to construct scripts that didn't fit the conventional model at the London Screenwriters' Festival, it caused a sensation. Writers  kept her talking for five hours afterwards. Here are some exit survey comments.

“Linda Aronson - absolutely sensational. So many ideas crammed in an hour and a half and she is a brilliant communicator and I could understand even the most complicated structures she was talking about. It was quite eye-opening and very inspiring. Even the stuff she flung in there as asides rang true and made me think”.  E J Fisher - Writer

“Linda Aronson (Non Linear) - The most prepared session I witnessed by far. She ran out of time, which was a shame because I would have sat there all day”. Chris Marshall - Writer

“Linda Aronson, by far. I know the business of screenwriting is just as important, but this is the kind of hands-on writing stuff that can inspire me to write all the way until next year”.   Jonathan Bart - Writer

“I was struggling with the re-write of my feature - thanks to Linda Aronson's workshop on non-linear structures I've figured out a new structure that captures the effect I am trying to achieve”.  Lorren Boniface - Writer

“Linda Aronson - gave me an unexpected insight into solving a major problem on one of my scripts”. Paul Brodrick- Writer

“Linda Aronson’s Non-Linear storytelling provided amazing insight into new ways of storytelling.  After the session I completely revised one of my ideas for a script and now it will turn out way more interesting!   Christina Georgiou - Writer / Composer

What a letter to receive...
Linda writes:

There are times when I was writing my three scriptwriting books, The 21st Century Screenplay, Screenwriting Updated and Television Writing: The Ground Rules of Series, Serials and Sitcom, particularly those times when I was doing things like viewing Jaws III for what felt like the twentieth time  (you think I'm joking), when I wondered whether it was worth it.
So it's very nice when people take the trouble to write and say they liked it.  I shamelessly reproduce one of these. Thank you very much Mark!

Holy mother of God... how did I not hear of you until a few weeks ago?

My film was a three-act structure, four main characters, over 22 years on several continents.  Act two was missing a lot of story, but if I filled it in with each character's beats, the script would be 200 pages.  My three-act structure simply was not a solution.   I re-read writing books I thought might aid me.  None of them had anything new or useful; they all covered the same old ground.

Finally I must have typed in the right search term, because I found your blog and some videos of you.  It was mere seconds before I was ordering a Kindle of your The 21st Century Screenplay on Amazon.   I started reading... and was still reading when the sun rose seven hours later.

I want you to know how much I appreciate your work.  If you ever doubt that your writing has made a difference in a writer's life - toss that thought out.  You have made a huge difference in my life and my writing.  Your book opened my eyes and gave me so many new perspectives.  As I digested it 3-4 times, I re-ordered my Netflix queue:  Babel, Three Burials, Caramel, 21 Grams, The English Patient... so many films.  I began applying patterns I thought might work.  Pretty soon I was literally jumping with joy at the results.

I could write more, but really just want to say THANK YOU SO MUCH